Rap music analysis time! This time we will be switching it up a little, with musical AND textual analysis. However, the two are not separate; we will see how they interact and reinforce each other.

Lately, I’ve been looking a lot at how a rapper structures his
rhythms and syntactic groupings together to reinforce his or her
message. Namely, this comes down to what words he or she accents. I’ll
set out some representative examples in Common’s rap from “I Used To Love H.E.R.”, rated on some lists as the greatest rap song of all time, to demonstrate what
I’m trying to say. (You can here the song here.)

Rappers use a combination of accent (where the word/note falls in
the metrical bar, what part of the word is accented, as well as whether
the word creates an accent with another word through rhyme,
alliteration, or some other way) to reinforce their message. For
instance, the words that Common places on the downbeat of the 4/4 bar
(meaning there are 4 quarter notes to a bar) are words that turn out to
be important in his overall message, which is something along the lines
of “I loved hip-hop back in the day, back when it was only about fun,
and now that it’s become commercialized, it’s lost its ideological
power.” (you might be able to better explain this than me.) An easy way
to do this is to place important words onthe down beats. For instance,
in bar 9 of my transcription, he places the word “heart” on beat 4. This
is an accent of the 4/4 bar; furthermore, he enhances this effect by
making the word further accented by having it rhyme with the word “park”
in the next bar (I differentiate between this kind of accent, which I
call a “poetic accent”, with the “metrical accent” I described earlier.)
Furthermore, he places the note on “heart” at the end of the phrase,
calling attention to it (the beginning and end of any musical structure
or form are structurally important places.) (This phrase is the
syntactic phrase of the grammar of his words; You’ll see that “She hit
me in the heart”, all contained within the phrase marking, forms a
complete grammatical idea.)

A similar situation can be found on the word “foul” in bar 37.
You’ll see that once again, foul is poetically accented by rhyming with
style in the next bar (although foul and style might not rhyme when we
say them, the way Common pronounces them they do rhyme.) Furthermore, it
is on a downbeat in the bar, and comes at the end of a phrasing. There
are tons of other examples on the level of these ones, such as “cool” in
bar 33, or even “past” in bar 39.

However, these are not even the most sophisticated use of this
technique of bringing more emphasis and force to Common’s message that
he uses. The best example, which is really quite sophisticated, comes in
bar 61, where Common delivers his most forceful and biting message of
all (you might want to describe just what this message is in your own
terms.) He lays it out: hip-hop just isn’t doing it anymore, it has lost
its way, it’s whack. Look at the phrase containing “Stressin’ how
hardcore and real she is”. Through a manipulation of accent as well as
his intonation (here, meaning changes in the pitch of the voice,) we can
see that Common is sarcastically mocking the new wave of rappers, which
would have included the g-funk of the west coast (We know that
Common is indirectly – directly for those in the know – referring to g-funk. He
says in bar 40, “she got into r and b, hip-house, bass and jazz,” all
elements in the g-funk of Tupac and Dr. Dre, and it is made blatantly
clear in bar 60 when he says “now she only fucks with the funk”, as
direct a reference you could make to Dr. Dre without saying his name. Furthermore, he uses the phrase “boys in the hood” in bar 42, a famous
movie 1991 movie depicting gangsta life in South Central LA.) You might
cite some other songs that are examples of all of the “popping glocks,
servin rocks, and hittin switches” that Common mentions in bar 57.

I am just trying to give some context for the Common’s comment
“stressin’ how hardcore and real she is.” Now we can see how he delivers
this message. He combines the elements of phrasing, accent, as well as
intonation. He raises his voice’s pitch on the word “real”, and from
this we can detect that he is mocking the use of the word “real” (a
subject which Dave Chappelle has fittingly mocked in his own skits,
something called “when keeping it real goes wrong.) Just like in the
previous examples, we see that Common has metrically accented the word
“real” (it’s on beat 3), as well as poetically accented it by repeating
the syllable “real” in the next bar twice (in “really” and “realest.)
However, that is not what delivers the impact of the message. Common
takes a rather long pause at the end of this message, the length of a
dotted eighth note (3 sixteenth notes all together) that gives the
listener time to think about what he says. He then delivers the
ideological punchline in the next bar, having set up the listeners
expectations for something next to come by ending the phrase with his
voice higher in pitch (like people do when they ask a question.) He
then delivers it: “she was really the realest before she got into
showbiz.” She was really the realest before all that commercial BS.

Common uses these pauses in interesting metrical places in other
places in the piece as well. His quarter note length pause in bar 13
emphasizes his “cooling out.” Just as he says verbally that he used to
cool out with hip-hop (the girl in the song), he musically cools out by
taking a rather long rest, one of the longest in the rap that doesn’t
occur across a barline (where one would normally expect a longer rest,
in order to orient the grammatical units logically within the metrical
divisor of the barline). His phrasing very particularly draws attention
to this, as he takes that rest.

Common repeats this technique in bar 31, when he takes a dotted
quarter note length rest (beat 2 into beat 3.) He says “Easily I
approach”. He thus slows down his cadence (the rate of his accents and
rhythms) at this point to emphasize his easiness musically. He uses a
similar pause in bar 52, a long pause within the bar (a quarter note
plus a sixteenth note duration) that emphasizes the word “money”,
introducing it in ominous terms.

Now for some textual analysis. Common
constantly uses words that could have double meanings when you consider
that Common is talking about music really, not a girl. The most
predictable of these terms is the use of the term “to do”, in context of
having sex with someone. For instance, in bar 10 he says “some new york
niggas had did her in the park”, on the surface meaning that some New Yorkers had had sex with her, but on the next level meaning the New Yorkers had made rap in the park. This is repeated in bar 63: “I did
her, not just to say I did it”. He means having sex on one level, but
really making music on the next. A similar example is nearby: he says,
in bar 63-64, “But I’m committed.” Used in this context, the term
committed has the context of relationship commitment. This works for a
girl, but also for Common’s commitment to music. Old school is another
double entendre; old school typically describes hip-hop cultural
elements from somewhere in the 80s. “Old-school music” is a phrase often
heard in rap circles when describing hip-hop from decades past.
However, in this context Common recontextualizes the word to describe a
human being, which works as well. But when we get to the end of the
piece, and Common reveals that he’s actually talking about hip-hop, we
can see in retrospect that his use of the term “old-school” really has 2
connotations.

Also, Common manipulates the length
of his phrases to emphasize certain areas. For instance, in bars 11, 12,
and 13, bars 29, 30, and 31, he shortens his phrases greatly. In other
places most phrases are about a bar long; in those 2 groupings, they are
more like half a bar. This variation keeps the ear interested in what
he’s saying.

That’s it for now. Thanks for reading this rap music analysis! 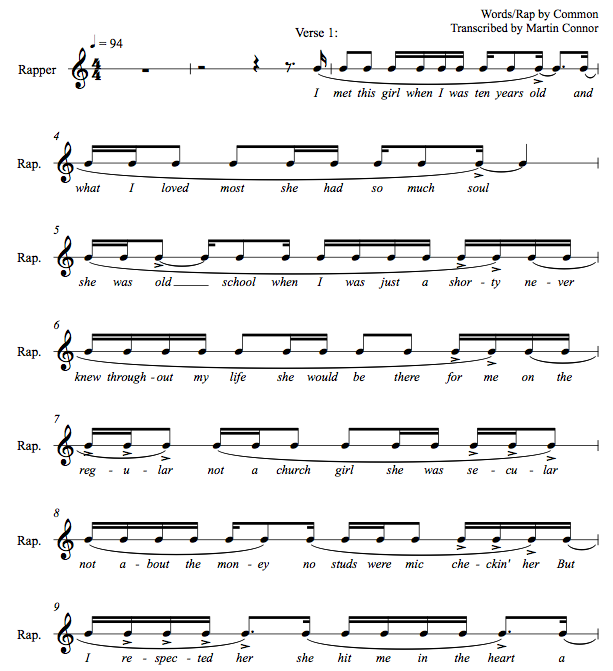 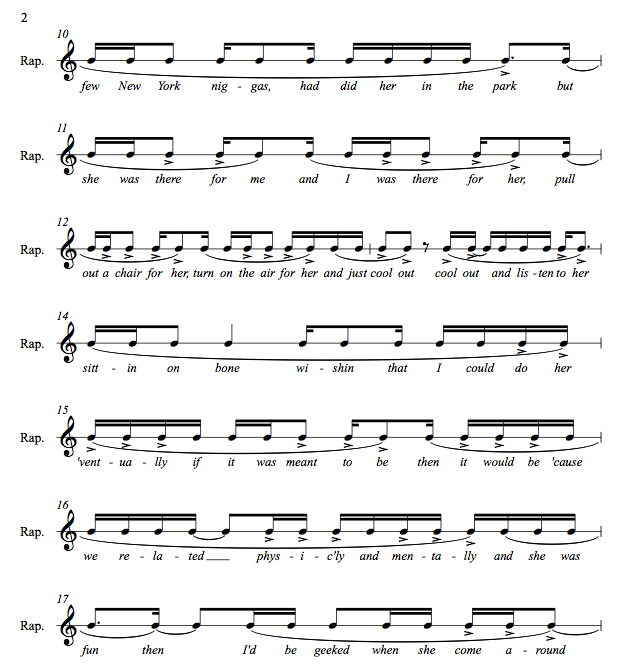 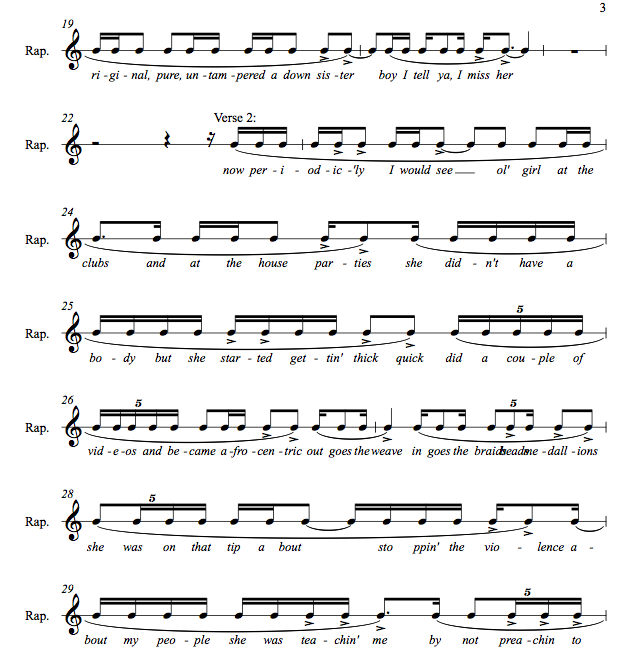 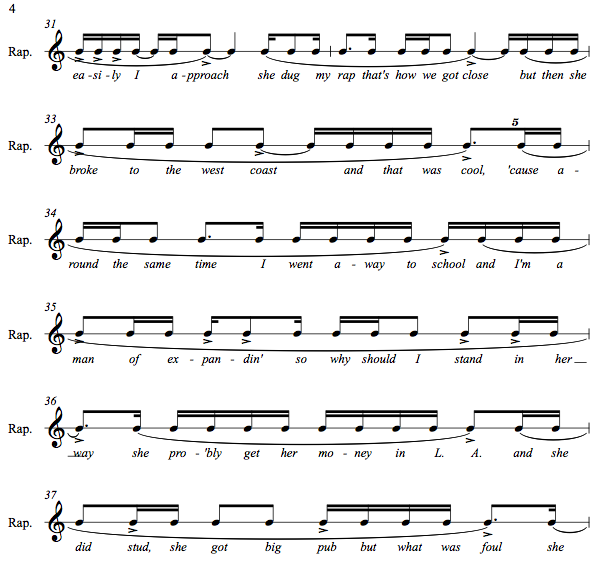 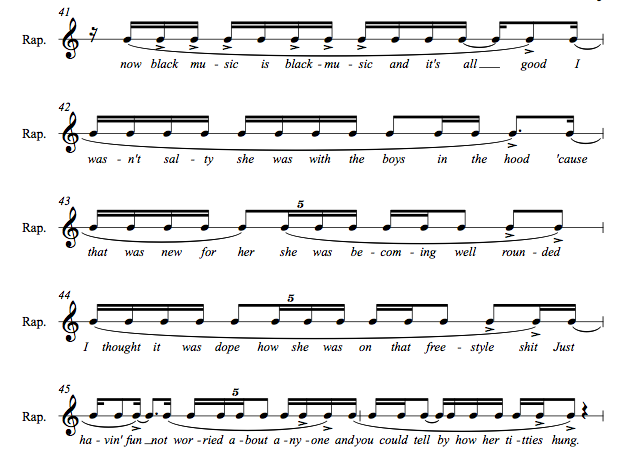 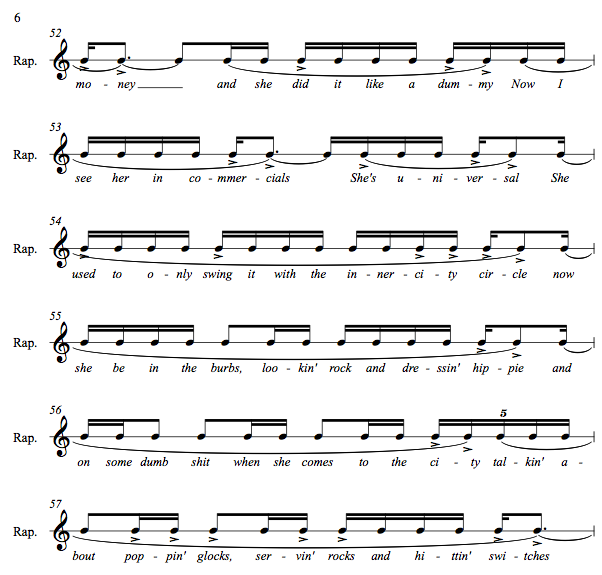 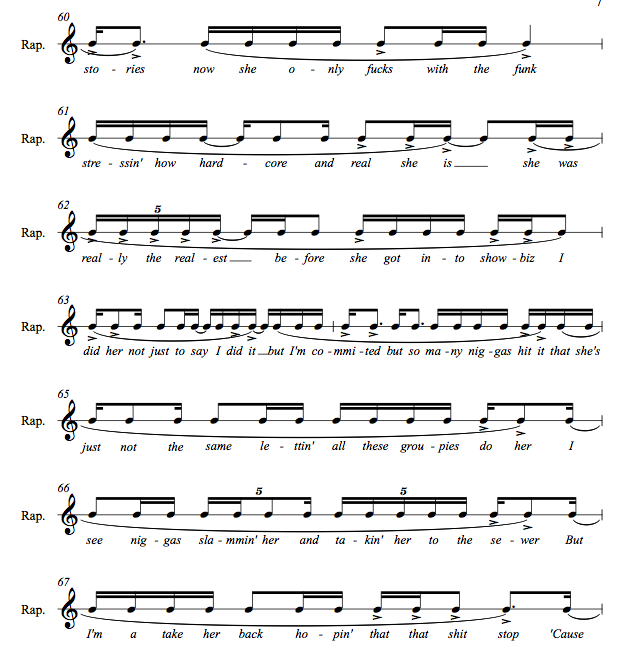