I know it. I know you always listen to rap, and you’re like, damn, “How has rap changed over the past 4 decades since its inception in the early 70s?” Or you might ask, “Are rappers more complex than they are today, or has the development of rap been relatively straightforward?” Well, I’m here to answer those questions.

First check out the data table and charts below on your own. Afterwards, I provide some analysis of mine own. The most popular artists I analyze, if you care to look for them int the chart specifically, are 2pac, Notorious B.I.G., OutKast, Nas, Run-D.M.C., Kendrick Lamar, Eminem, and Kanye West. The data points on the charts are tagged with both the year and the value in an (x, y) form. Afterwards, I’ll talk about what these charts mean a bit. 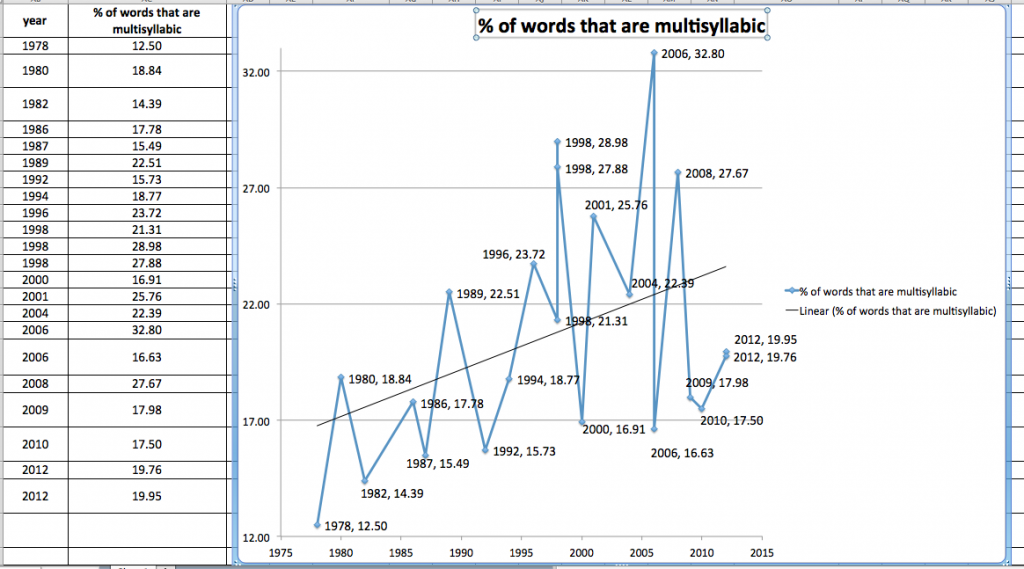 Because I’m a complete weirdo (but also to win a competition to present a lecture at the Region IV Society of Composers, Inc. conference in KY that you can watch the end of here,), over the course of about 5 months I transcribed and analyzed 23 different rap songs. They are evenly spread over the past 34 between 1978 and 2012 years, coming about once every 1.5 years. I chose 1978 because that’s the year of rap’s first mainstream hit, The Sugarhill Gang’s “Rapper’s Delight,” which comprises the first song in this series. The final songs are 2 from Kendrick Lamar, “Backseat Freestyle” and “m.A.A.d city,” from his 2012 album good kid, m.A.A.d city. With those starting and ending points, these 23 songs cover the 34 years between 1978 and 2012 pretty evenly, with the biggest gap being 3 years at two different periods, while sometimes the gap is as small as a year or a few months in the same year.

I pulled the songs primarily from among the ones that are in Andrew DuBois’ and Adam Bradley’s book “The Anthology of Rap.” They chose those songs in there based on the following criteria, which I now quote from page xli of their preface:

As they say, “Each lyric included had to meet at least one of [these] standards.” For instance, the song “Rappin’ Blow” by Kurtis Blow, “Fresh, Fly, Wild and Bold” by the Cold Crush Brothers,” Outkast’s “Aquemini,” and many others among my 23 songs are included in that anthology. Among the ones that weren’t, such as Kendrick Lamar’s 2 songs from 2012, I think that if Adam Bradley were to re-make the book today after its original publication in 2010, he would include these songs.

Now for the data itself. My method was primarily a verbal/grammatical pen-and-pencil method. That is, I transcribed all of these songs’ musical rhythms AND words, and then counted them up by hand in order to measure the following two metrics:

1.) What percentage of the words in a certain rap song or verse are multisyllabic (defined as having more than one syllable), and
2.) The average length of words in rap verses over the past 36 years in terms of syllables per word.

If you are very familiar with rap, or even general trends in art at large (possibly?), the results may be encouraging to you. The trendline on each chart measuring the change in value of each respective metric slowly trends upwards over the years. The trendline of the multisyllabic percentages trends up more sharply than that for syllables per word. As a qualitative comparison, these findings largely confirm what hip hop fans might already know: the verbal dexterity and complexity of someone like Nas on 2006’s “Don’t Get Carried Away” is a far cry from the Cold Crush Brothers’ sing-songy raps from 1984 on “Fresh, Fly, Wild And Bold.”

I’ve blued the values of each respective metric that are the lowest in that set in the first table, and redded out the value that is the highest. Note that the lowest value of Sugarhill Gang in terms of multisyllabic word percentage and Kurtis Blow in terms of syllables per word occur very early on in rap’s history, while the higher values – such as that for Talib Kweli in 1998 for syllables per word and Nas in 2006 for multisyllabic words – occur much later in rap’s history.

Now for some qualitative analysis. I’m always hesitant to enter into the question of whether we can say a certain characteristic of a certain artwork makes that piece of art “good” or “better,” but not because I don’t think we can talk about the answers. I only hesitate because people have a knee jerk reaction to negatively react to such a supposition. But I think I have some good reasons for being able to respond in the affirmative in this instance. So, to be as inflammatory as possible, let me just come out and say it: more complex rap is better.

Now, I believe this to be true for a number of reasons, which will bring me back to why the charts above matter. Rap is about as ubiquitous a commodity as you will find in the modern world. It is everywhere you go: playing on the radio, in dance clubs, walking down the street when a car passes, on Internet ads, in TV commercials, on Pandora when you’re listening to it at home. I myself am completely inundated by rap pretty much everywhere I go. I wake up in the morning to a rap song. On the way to work I put a rap CD in. At work as a teacher, sometimes I’m teaching classes on rap. I come home and I try to write my own rap (key word for now: try.)

What this all adds up to is that I hear a lot, a LOT of rap. I can clock up to 7 hours a day of rap. And when I hear this much rap, which oftentimes consists of me listening to the same songs or albums literally hundreds of times, my ear gets tired out very often if I hear the same thing over and over. Which is a problem in most popular rap: the rappers today rap very similar to each other. Sometimes they talk about the same thing – money, girls, power, whatever. (But let’s also be clear that that subject content does not cover MOST rap, as many people think it does.) Rather, rappers also rap technically in ways very similar to each other. When I use the word “technically,” I am talking about the musical aspects of a rapper’s rap. This includes two of the metrics that are measured above: overall, how long a rapper’s words are. And if a rapper is always using the same length of words, and moreover, always using short words (as we measure above,) then this gets very boring. I’ve heard it. It’s old hat. I can hit the radio for Big Sean/Kanye West/Waka Flacka/N/etc./etc./etc. for styles that are technically very similar to each other. (Note that delivery, how a rapper says his or her rhymes, is not covered under my definition of “technical.”)

This is why complex is better: it introduces more variety into the listener’s ear. The charts above can also be used to explain why the rough list of my top 10 rappers – Black Thought, Jean Grae, Talib Kweli, Nas, Mos Def, Eminem, Pharoah Monch, Notorious B.I.G., 2pac, and a changeable 10th – are all active only from about the early 90s on. Rakim (the 80s) Melle Mel (late 70s to early 80s), Kool G Rap, Big Daddy Kane, and other early pioneers are all noticeably missing from that list. That’s because, to me, their styles (which includes length of their words, among MANY other things) have already been digested and assimilated by today’s rappers. Jean Grae can rap like Big Daddy Kane. Jean Grae can rap like Rakim. But she also added her own Jean Grae-ness to make something new out of something that was old (without any kind of negative connotation.) That’s why all of my work, such as my analysis on 2pac here, or Kanye West and Eminem here, all pay so much attention to the technical aspects of an emcee’s work. It’s what introduces variety into the mix, much more than many other aspects of a rapper’s work can.

That’s all I got for now. If any of this statistical analysis is wrong, please let me know. I’m not a statistician, I’m a musician with some math education behind me. Also, if you re-do any of this analysis and our results come out slightly different, remember that I did all of this by hand and mind, with no computer help until I had already compiled the data.

If you would like to see the excel info on your own, email me at [email protected] in case you want to screw with it and see what you can come up with. I also have other stats I could put out, such as syllables per rap verse, and what percent of grammatical and musical accents line up and what percentage don’t. Feel free to request these as well.