The time has come for another rap music analysis. (If you missed the last analysis, when I analyzed Game’s first verse from his song “How We Do”, you can see it here.) This time, we’ll be looking at Eminem’s “Business”, produced by (who else?) Dr. Dre. (In fact, I even have an article that counted up and kept track of every single type of instrument Dr. Dre used between the years of 2000 and 2009 in his songs; you can read it here.) But I’d really first like to start by trying to emphasize the fact that even if you can’t read music, I still think you can get something out of it (like understanding how rap works better) by reading the following. But if you would like to see the complete verse notated, I’ve supplied it at the very end of this post.

Unlike the last analysis, we won’t be looking at a full verse (16 bars) of Eminem’s; instead, what interests me is the 8 bars before the last 4 bars in his 3rd verse. (Listen from the clip at 2:47 until about 3:09, from “Just to get to see…” until “Can’t leave rap alone, the game needs me”.) I am concerned with only these 8 bars and none before or after them because in these 8 bars Eminem bases all of his accents on the syllable “ee.” We will get to that later though. Although we will still be looking for the accents created by rhyming (and as shall soon be explained, assonant groups,) as we did in our analysis of the Game verse, we are less concerned with Eminem’s phrasing (which Game varied greatly) and more with his formidable rhyming capabilities.

However, for the sake of comparison we will begin with Eminem’s phrasing. It is fairly straightforward. Eminem, unlike Game, just repeats the same 1 bar phrase every time in each of the 8 bars. Game, meanwhile, played with phrasing acceleration and deceleration greatly: recall that he varied his phrases in blocks of 8, beginning with 3 2 bar groups of ½ bar, ½ bar, 1 bar, and then ending the final 2 bars with phrases of ½ bar, ½ bar, ½ bar, ½ bar. Eminem is less concerned with this, as we shall see. The basic rhythmic idea he uses and repeats, however, is much longer, being a bar long, and more complex. It is as follows:

He will vary from this sometimes (“Jesus, how could shit be so easy?”,) where the 2nd beat is different from that posted above), but it is the main prototype for each of the 8 bars (as an example, see bar 2: “see an Emcee who breathes so freely”.) As was said before, this differs from Game’s approach, who varied his phrasing greatly. But here, Eminem propels the music more with a very catchy, complex, and longer rhythmic idea that is repeated over and over, rather than short ideas. He keeps it from lapsing into boredom by his incredible demonstration of his rhyming ability in these 8 bars. There are 80 notes in these 8 bars. Of those 80 notes, 37 of them are on a word with an “ee” sound, which I have indicated with accent marks. (We will get to it in a second why I have marked every “ee” sound as accented and not just the rhymes.) That means that almost every other syllable has an “ee” sound. And in a total of 8 bars, that means there are over 4.5 “ee” sounds per bar (37/8). And, in a bar of 4 beats, that means that there is more than one “ee” sound every beat. That is pretty incredible. And remember this whole time that it is all on the same syllable.

If you do a distribution graph of where the “ee” sounds fall in the bar by every 16th note, some further information can be gleaned. The most important thing is to see that every one of the 4th beats of the 8 bars has 2 eighth notes and is a multi-syllabic rhyme (pretty amazing in itself.) A multi-syllabic rhyme is a rhyme that is made up of more than one syllable. But what makes these multi-syllabic rhymes (of 2 syllables) so interesting is that they also rhyme within themselves. For instance, not only does “freely” rhyme with “breezy” (bars 2 and 3, respectively,) but they also rhyme with each other: “free-“ and “-ly”, and “bree-“ and “-zy” (and “Le-“ and “-vy”, and so on.) These are the only two rhymes and accents that are repeated in every single bar. As for the rest of the distribution of accents, you can see that Eminem also propels the music with the varying of the metrical placement of the accent, placing it on every note in the 1 bar prototype shown above (except for the final sixteenth note of the first bar, and the 2nd eighth note of bar 3). In their propulsion of the music through the variation of the accent in the meter between on the beat accents and syncopated accents, Eminem and the Game are quite similar.

Now, as for why I have marked all “ee” syllables as accents in the notation and not just the rhymes (for instance, marking “breathes” in bar 2, even though it doesn’t rhyme with any other word there), it is because Eminem is using something known as “assonance.” From Wikipedia: “Assonance is the refrain of vowel sounds to create internal rhyming within phrases or sentences.” Assonance creates the same accent as rhymes do in the verse. This use of assonance is one of the most interesting things done in this song. It expands the normal tools or techniques of what a rapper can use to create and vary accents in his raps. This also opens up the use of other techniques (perhaps already used, but ones that should be used more often,) like alliteration or consonance (the refrain of consonant sounds to make internal rhyming.)

So we’ve seen that Eminem and Game differ in their approach to phrasing (in this instance at least, and if I had to guess from hearing a lot of their other works, in other instances as well). They also differ in their approach to rhyming. Eminem is very, very concerned with his complex rhyming. It is one of the features of his rap that he is most proud of. Here, Eminem tries to fit as many rhymes (here including “assonance” under the more general term of “rhyme”) as are possible into his verse. He also puts rhymes in places other than the end of a phrase (this can be seen even as early as bar 2, which is really the first bar after a pick-up beat: “SEE an em-CEE who BREATHES so FREELY,” after which the 1 bar phrase ends.) By comparison, Game always ends his phrase with an accented “uh” sound, and never makes a rhyme within the phrase. By doing this, he delineates phrase beginnings and endings with his accents, something Eminem does not do. Game’s approach allows the listener to follow very closely when the phrases start and stop. The fact that Eminem does not do this and puts rhymes inside his phrases make the structure of the verse sound much less uniform and free. This also contributes as a reason for why although he repeats the same 1 bar phrase 8 times, it never sounds old or tiresome to the listener (the other major reason is that the 1 bar idea is interesting enough to be repeated so many times without losing its power.) Their differences aside though, Eminem and Game are quite similar in their variation of the metrical placement of the accent created by their words (whether through rhyming, assonance, or some other way.)

But be sure to see the next analysis when we’ll be taking a look at a verse from Nas, who is extremely different (indeed, there are very few who can like him) from Eminem and Game in his entire approach to phrasing and accent.

Anyone still think there aren’t rappers who have talent?

Hope you enjoyed this rap music analysis! If you liked this article on Eminem, you might like the one I did on his verses from the Dr. Dre song “Forgot About Dre” here, or the one I did on his song “Drop The Bomb On Em” here. Also, feel free to check out my other articles too, like the series I did on Eminem collaborator Kendrick Lamar: 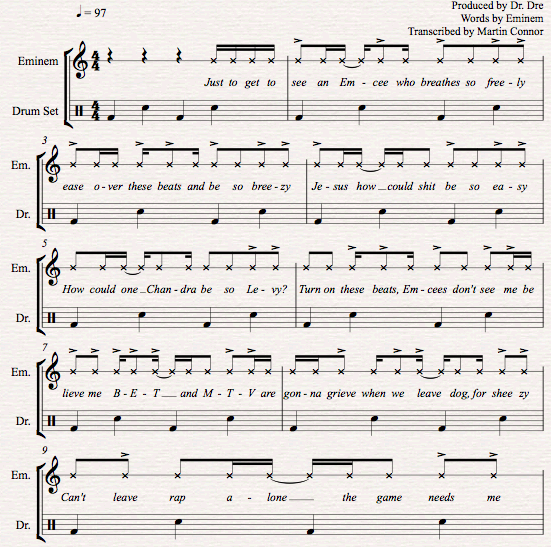