Lucky for us, Twitter acts as an immortal showcase of the stupid things we do and say. That goes for rappers too. (I’m just saying, I hope no one ever does a story like this on me. It will probably start with asking why I re-tweet Jean Grae lyrics at 10 PM on Fridays.) But the math behind this article is easy: people do and say crazy shit/rappers especially + Twitter saves it = here are the 5 most outlandish rap stories of the past year as told through Tweets:

Normally, a rapper would want you to find out about them through their music, and not because of something wildly inappropriate they did. Unfortunately, the second scenario was the case for when I heard of French Montana, and kinda made his music hard to take after that. On February 29 this year, Montana performed at the Theatre of the Living Arts in Philadelphia a.k.a. PHIL-TOWNNNN!!! (Okay, no one calls it that.) And as it happens someone got shot and died outside of the concert. Police later stopped Montana to question him about the incident. Montana responded with the above tweet and an instagram photo of him looking pissed off, clearly not going anywhere. Came off as rather dick-ish. Whatever, let’s go to a less harmless egotistical rapper act instead: 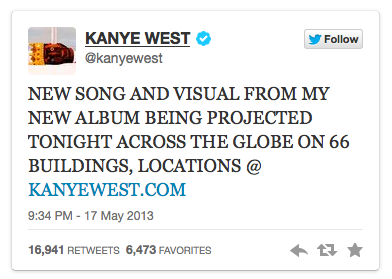 When this story broke, I had to explain to my non-rap fans, all of who were still familiar with Kanye’s antics (“George Bush doesn’t care about black people,” “Beyoncé had one of the best music videos of all time,” etc., etc.,) that this was actually a real story. To promote his recent Yeezus album, Kanye broadcast a music video all across the world at the same time. The video largely consists of Kanye’s own face, over dozens of feet of square area, rapping his song “New Slaves.” Check it out:

Only Kanye could think of something like that. To be clear, I’m a huge fan of the man. If he is one of the few people in the world with almost endless resources at his disposal for advertising and publicity, why not do something completely outlandish? I am going to have definitely disagree with Kanye’s recent characterization of the 2nd verse of “New Slaves” as the greatest verse in the history of music, as he recently proclaimed on music. I’d expect nothing less from Kanye, though.

I’m not gonna give you any context for this one. Just sit with this reality for a while, a quote which hopefully they engrave on Lupe’s tomb:

Understandably, there was a lot of outrage over Ross’ apparent glorification of date rape. Ross felt the pain in not just his public image but his wallet as well when he lost an endorsement deal with Reebok worth millions of dollars. However, the message may not have hit Ross right away, as he offered up the above lukewarm apology. Maybe he just meant apologies are awesome with the #boss tag?

The outcry over Ross’ lyrics is similar to other public debates over rap lyrics that have taken place recently, such as over Lil Wayne’s “Emmett Till” lyric and Kanye West’s recent lyric about “keeping it shaking like Parkinson’s”. While being a sign of current problems in rap’s lyrics, the fact that these debates are taking place at all is a good sign. This is because they can eventually lead to change. Rap has had lyrics like this for years, but as rap matures, it is time to move on.

Tim Dog’s tweet from 2009 seems damn near a premonition now. In 2011, Tim Dog pleaded guilty to grand larceny for conning a woman. Facing a long prison sentence and having to pay back tens of thousands of dollars to the victim of the scheme, TD reportedly died of complications from diabetes. However, none of the usual events surrounding a death were found: an autopsy, a funeral, or death certificate. An arrest warrant has now been issued for him in Mississippi. As he says on a song off his “Do or Die” album, he may have “Skipped To His Loot” one too many times.

So, what’s the equation answer? If you, as a rap fan, are not on Twitter, I highly suggest it.