There are two main challenges in the writing about rap from a strictly musical point of view, and not a poetic one, for instance. One is keeping my argument mostly at the level where anyone, even non-musicians, can understand it. The second is making all of my arguments as quantitative as possible, and thereby most convincing. I have to do that because I’m writing about a strictly sonic phenomenon, and so it’s hard to demonstrate any of my claims, even when I’m just giving general descriptions. If I were talking about poetry or race relations, I could quote or transcribe song lyrics; I can’t do that for the strictly musical elements of rap.

All of this is especially challenging when discussing a musician’s versatility, or lack thereof. However, some simple statistical analysis, equally understandable by the layman or laywoman, can bolster what might be the shortcomings of strictly music analysis in dealing with those 2 problems mentioned above.

In lots of my other articles, I’ve described what bars are. As a reminder, they’re the building blocks of musical time that are always repeated in a song, and always last the same amount of time. They’re similar to how minutes are the building blocks of chronological time. However, bars are different from minutes because bars can last different amount of times between different songs. We need this so that some songs can be slow, and other songs can be fast.

I also mentioned that each bar is made up of 4 beats, just as every minute is made up of 60 seconds. As it turns out, the rate at which those beats come, when compared to a minute, can give us a measurement of how fast or slow a song is. The rate of how slowly or quickly beats come in a given song is called BPM, for “Beats Per Minute.” The lower the number of BPM is, the slower a song is. Conversely, the higher the number of BPM is, the quicker a song is. Songs can vary widely in their BPM, anywhere from that of John Cage’s piece “As Slow aS Possible,” which is to last 640 years in a certain performance in Germany, to the 184 beats per minute of Khachaturian’s “Sabre Dance.”

Rap songs, especially recently, have a much narrower range of speeds in which they appear. As we’ll see, this is usually somewhere between 60 and 120 BPM. However, this does not bespeak a closemindedness of rap’s music-makers; instead, it only emphasizes the importance of a unique and personal approach that must come from the rapper on every song.

Using an investigation into the speeds of the songs at which certain rappers perform, we can see who is more versatile in their ability to deliver their lyrics, and who is more narrowly focused.

Using music software, I calculated the speed of songs from different rappers’ discographies. In certain situations, I was able to use every official album from an artist; in others who had a smaller output, I was forced to limit the search to only their studio albums. However, this always resulted in a sizable data set of at least 36 songs.

When I think “versatility” in rap, there’s only one person who comes to mind: Black Thought, emcee for the rap group The Roots.[1]

The Roots were the artistic force behind the second rap album I ever owned, their 2002 album Phrenology.[2] Since then, they’ve dropped The Tipping Point (my personal favorite,) Game Theory, Rising Down, How I Got Over, Wake Up!, Betty Wright: The Movie, Undun, Wise Up Ghost, and …And Then You Shoot Your Cousin. During this time, they collaborated with everyone from Elvis Costello to John Legend to Betty Wright. They’ve also been the backing band for the TV program “Late Night with Jimmy Fallon.” So far, I’ve got a lot of evidence that Black Thought is a jack of all musical trades, and a master of all musical trades. And that’d be good enough for a lot of writers…

But not me, which is where my aforementioned promise of statistical funsies comes in.

As I mentioned before, I went ahead and calculated the speed of Black Thought’s songs for a huge portion of his oeuvre.[3] The results for Black Thought’s 126 songs are below, in ascending order:

Now, two things are pretty clear from this:

1.) Black Thought has a huge catalogue, and

2.) Black Thought has rapped over songs with tons of different speeds. His lowest song has only 60.8 BPM (on “Boom!”, from The Tipping Point,), while his quickest has 117 BPM (on “Here I Come,” from Game Theory.)

But in that list format, all of that information remains largely intellectual, and doesn’t really hit home. Let’s put it in a graph form that’s much easier to understand, because it’s visual. That same info, in graph form, looks like this: 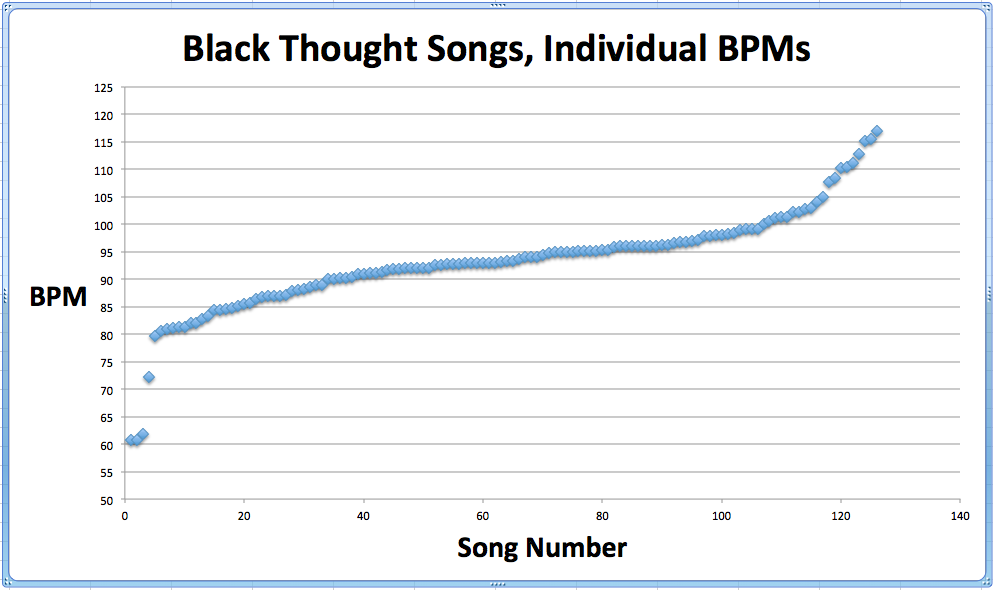 This is a little more helpful. We can see that at either end of the graph — all the way to the left, or all the way to the right — we start getting some outliers, which are points that aren’t very close to the main portion of the data.

But what’d be really helpful is a graph that described, in detail, where Black Thought’s speeds fell most often, and where they fell least often. That’s exactly what this next graph is: 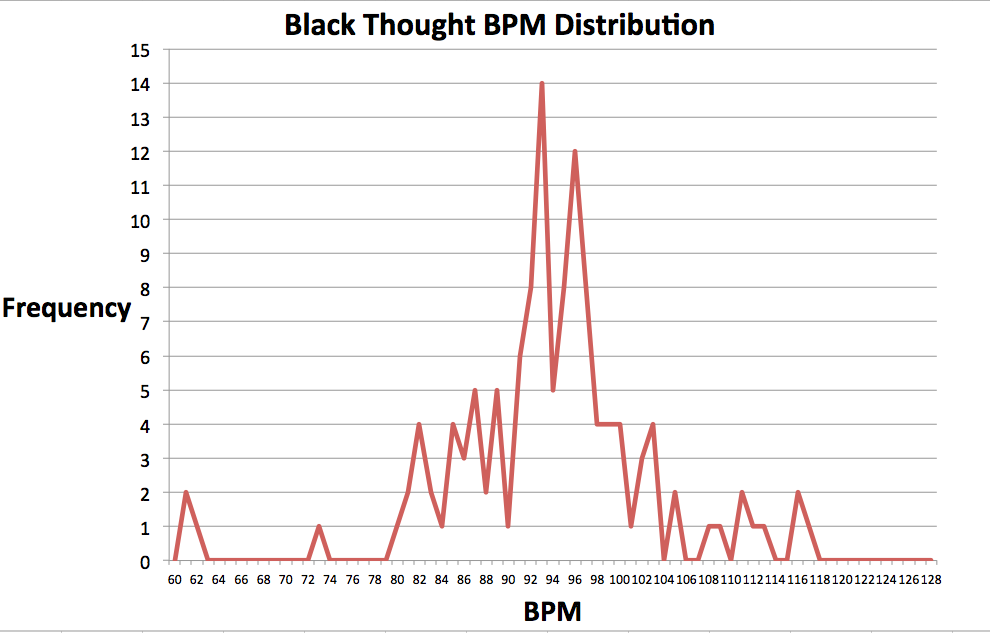 The above graph shows where Black Thought’s BPMs fall most often. The horizontal axis along the bottom of the graph shows the BPMs, while the vertical axis along the lefthand side shows how often Black Thought had a song with that BPM along on the bottom. For instance, go to the chart’s highest point in the middle, closest to the very top of the graph. This falls along the vertical “Frequency” axis at exactly 14 times, while it falls on the horizontal “BPM” axis around 93. This means that Black Thought had 14 songs with a BPM of 93. This is his most common BPM, and applies to songs as different as “Stay Cool,” “What They Do,” and “Ain’t Sayin Nothin’ New,” which all come from 3 different albums.

Meanwhile, there are some other BPMs for which Black Thought doesn’t have a single song. If you look at 66 BPM on one end of the graph, or 120 BPM on the other end of the graph, you’ll see that the graph’s line doesn’t rise at all above the horizontal axis, and so it’s value is “0,” which means “0 songs are at this speed.”

As we’ll see soon, Black Thought has a very wide range of BPMs. His slowest song is at 60.8 BPM, and his fastest at 117 BPM.[4] This gives him a BPM range of about 56.2 BPM. His song’s average BPM is 93.2, which I suspect is true for most rap nowadays. That number also fits in very well with the frequency distribution of his BPMs, since it is a number very nearby — 93 BPM — which is the most frequent in Black Thought’s musical speeds.

If I suspected Black Thought to be extremely versatile, then I suspected another rapper, Waka Flocka, to be more limited in his musical approaches. If I applied the same operations to his rap that I just did for Black Thought, could I back this up with empirical proof as well?

Waka Flocka has a much more limited discography than Black Thought, so he has only 36 songs over his 2 official, major record label studio albums, Flockaveli (2010) and Triple F Life: Friends, Fans, and Family (2012.) The BPMs of all of these 36 songs are below, in ascending order:

Even in simple list form, some differences between Black Thought’s musical speeds of Waka’s speeds immediately stands out. For one thing, Waka Flocka’s speeds are more concentrated at the lower end of the BPM speed; 29 of the songs fall between 60 and 70 BPM. (For the musicians: double-time tempos were reduced to a straightforward BPM.) We can also see that Flocka’s slowest song, at 60 BPM, is slightly slower than Black Thought’s lower limit of 60.8. Additionally, Flocka’s fastest song, at 85 BPM, doesn’t come close to Black Thought’s comparatively breakneck speed of 117 BPM. So while Black Thought’s range of speeds is 56.2, as we said before, Waka Flocka’s range is only 25.

This is all represented visually below: 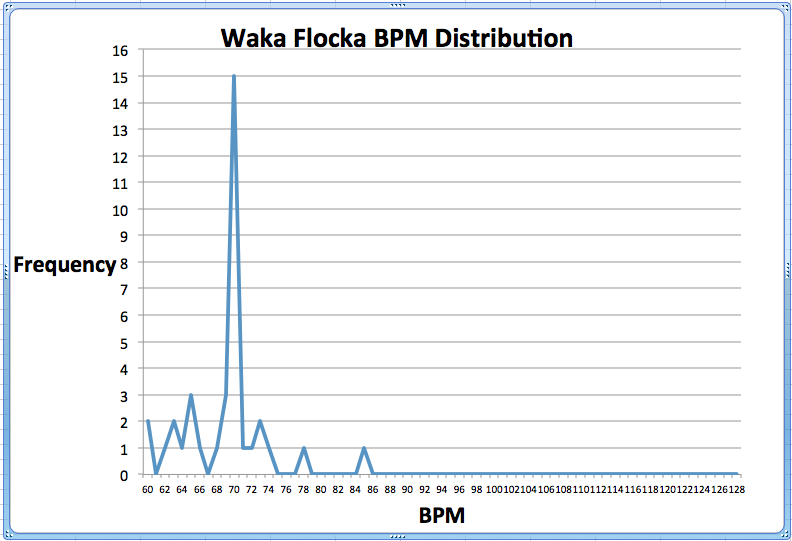 As we can see, Waka Flocka’s BPM speeds are mostly all the way on the left, towards the slower and lower end of the spectrum. Meanwhile, Black Thought’s speeds were more equally spread out.

We can, in fact, combine the frequency distribution graphs of both Black Thought and Waka Flocka to compare them visually: 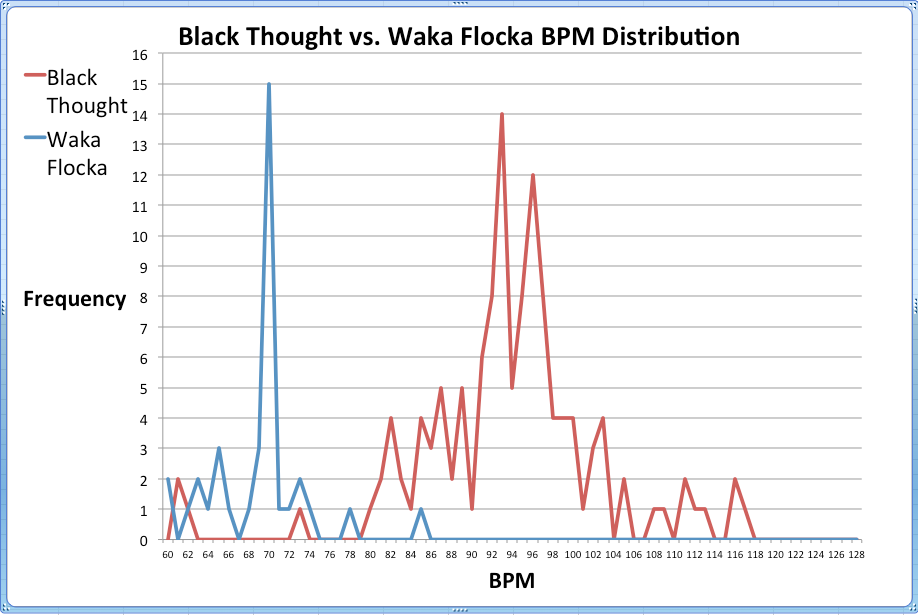 These statistics have already yielded some great results in describing the differences between rappers. Simply put, Black Thought raps over quicker songs, while Waka Flocka raps over slower songs. However, we can also calculate how much variation there is in each rapper’s output by talking about each data set’s standard deviation.

As the Encyclopedia Brittanica says:

“Standard deviation, in statistics, [is] a measure of the variability of any set of numerical values about their arithmetic mean (average.)”[5]

In fact, the standard deviation for Flocka’s BPM data set is…4.77

This quantitatively confirms the qualitative assertion with which I began this chapter: that Black Thought is a very versatile rapper. So WF might be a great rapper, but it wouldn’t be because of his versatility.


[1] And not just because he too has the good luck to be from Philadelphia.

[2] Will Smith’s Big Willie Style was the first. Obviously.

[3] A rapper who’s been in it since at least 1992 is bound to have a huge amount of recordings, so to gather every song was basically unworkable.

[4] Double-time songs in these charts are represented in straight time, at their “true” speed, without double counting quarters.